[REVIEW] Alone in the Kitchen with an Eggplant : Confessions of Cooking for One and Dining Alone by Jenni Ferrari-Adler 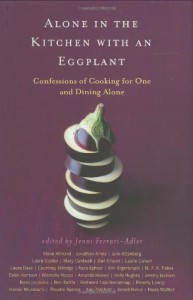 It is certainly true that cookie is therapeutic, creative, and all those other faintly creepy self-helpish words. I would love to tell you that learning to cook was part of my journey toward actualization. I would love to tell Oprah this. I would love to tell Oprah this while weeping. But I learned to cook for a much simpler reason: in the abject hope that people would spend time with me if I put good things in their mouths. It is, in other words (like practically everything else I do), a function of my desperation for emotional connection and acclaim.
Que Será Sarito: An (Almost) Foolproof Plan to Never Ever Eat Alone Again by Steve Almond

I’m going to start this review with a story. Something I (almost) never do.

In the summer of 2011, I moved to London to study pâtisserie out of very strong whim. I call it a whim because what else can you call a sudden desire that sprung forth out of nowhere? I don’t remember being pulled towards the kitchen at any point in my life. Many people said I should go to Paris but since I didn’t really possess a strong grasp of the language (high school french only served me enough to sing french Christmas carols around school), I figured I better go to a city where I had a better chance of communicating.

This would be the first time I lived on my own, something I had been dreaming of since I was in 8th grade. It would be the first time that I would be left to my own devices. That meant I could eat whatever I wanted (CEREAL ALL DAY!), do whatever I wanted (not leave the house for 4 days straight while watching Snog, Marry, Avoid and Extreme Couponing) and nobody would say anything about it.

Let me tell you, nothing compares with leaving your apartment and then coming back to see that everything was exactly where you had left it. Nobody took the book you were reading and set it somewhere else, nobody arranged your organized mess, nobody ate the last moravian cookie in the tin, nobody would judge you for having 2 bottles of wine and 1 water bottle in your fridge as the sole residents.

Because I was on my feet for 6 hours straight, whisking, folding, kneading, and balancing heavy cookie sheets, I had no desire to cook myself anything when I got home. All I cared about was washing out the black currant stains from my fingers, sitting in front of my TV on the IKEA couch I had assembled all my by lonesome (a feat for me) and stuffing myself with dry Red Berries Special K cereal.

I had no problem repeating the same meal over and over. The familiarity of the taste offered comfort. I was in a strange land. The only other Dominican I knew lived more than 10 tube stops away. Half the time that detail didn’t matter but when it did, I had my old faithfuls ready.

When I got tired of eating dry cereal, I went to the supermarket and bought a bag of 20 baby clementines. That became my go-to snack/meal for a while.

It wasn’t until 5 months had gone by that I decided to make myself something hot. You know, besides the UK version of Chef Boyardee. A sixth re-watch of V for Vendetta gave me an idea.

Eggy in a basket (also known as eggy in a hole). Simple, comforting and so easy to make.The cackling sounds that erupted from the pan when I dropped the egg, the aroma of sizzling brioche bread would flood my tiny kitchen. For the first time, I felt like a grown up. I was taking care of myself. I had other things to consume beside copious amounts of wine.

Reading Alone in the Kitchen with an Eggplant transported to that tiny kitchen in London. The one with the see-through curtains, the wooden floor that creaked every time I took a step, the same little kingdom of solitude with me as the queen.

Some of these essays are fun and relatable, like Asparagus Superhero by Phoebe Nobles. I can perfectly see myself eating asparagus seven ways to sunday until they disappeared from the market, no problem; others like Thanks, but No Thanks by Courtney Eldridge are painful and somewhat uncomfortable to read all thanks to the brutal honesty. Some stories include recipes, a few of which I have earmarked for that elusive weekend when I am completely alone at home. Eating alone is a very personal affair and reading about how many of these authors dealt with those lonely times made me feel I had gained access to a club I didn’t know existed. For when you’re eating alone, at least for me, it feels as if there is nothing and no one else outside those four walls. Sometimes, that’s just what I need.

Overall, Alone in the Kitchen with an Eggplant : Confessions of Cooking for One and Dining Alone is like drinking a glass of very good wine; one must consume it deliberate slowness to really enjoy the notes.